The bridge was originally constructed in 1804/5 to carry the road from Shrivenham to Bourton. With the construction of Avenue Road, access to Bourton was improved and this route became less important and has been a simple track and bridleway for many years.

In the late 1940's the bridge had become unsafe and Oxforshire County Council decided to demolish the bridge and replace it with a culvert to take the bridleway across the canal. OCC kindly sent us their old, original drawing for the scheme.

The project to rebuild this bridge is now nearing completion; it has been rebuilt from the foundations up with a brick arch, similar to the original.

WRG teams continued through the autumn of 2006 to construct the arch with 3 courses of bricks. Equal heights had to be build each side to balance the pressure on the formers.

Work restarted at Easter 2007, with a WRG team returning to build the side walls. Volunteers continued the brickwork through the summer and by October all four walls reached the apex of the arch.

Early September saw a long weekend work party. Starting on the Thursday, NPower donated 80 cubic metres of Pulverised Fuel Ash (PFA) from Didcot Power Station for use to create the slopes for the bridge and a band of volunteers from NPower started moving this material to the bridge by wheelbarrow. From the Friday to the Sunday, Trust volunteers plus Essex WRG, helped now with machinery, moved all the PFA from the lane to the bridge and compacted it. For the first time, it was possible to push a wheelbarrow across the bridge!

The new bridge was opened for public use in July 2012, after the addition of fencing and Oxfordshire County Council had agreed that the bridge was safe. The temporary bridleway diversion was then closed.

In July 2013, the Waterway Recovery Group returned for a week-long camp. They repointed some of the brickwork, cut and fitted coping stones, that had been donated by Network rail from a demolished bridge, to the top of the eastern parapet wall and also rebuilt the canal north-east wing-wall that supports the towpath.

June 2018: at last we were able to host a work-party to cut and fit the coping stones to the second parapet. London WRG thus had the honour of completing the bridge rebuild.

Work is still required to rebuild the canal wing-walls. the Branch managed to fully excavate the north-west wall and start to rebuild in 2016, but it became impractical to do work intermittantly as the canal readily fills. So the rebuild of all the wing-walls is planned for a future WRG summer work-camp. 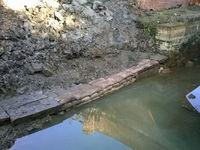 Once work to the wing-walls has been completed, we can look forward to removing the temporary dams and landscaping the site.