Why not head over to Facebook and see our boat teams progress in pictures. 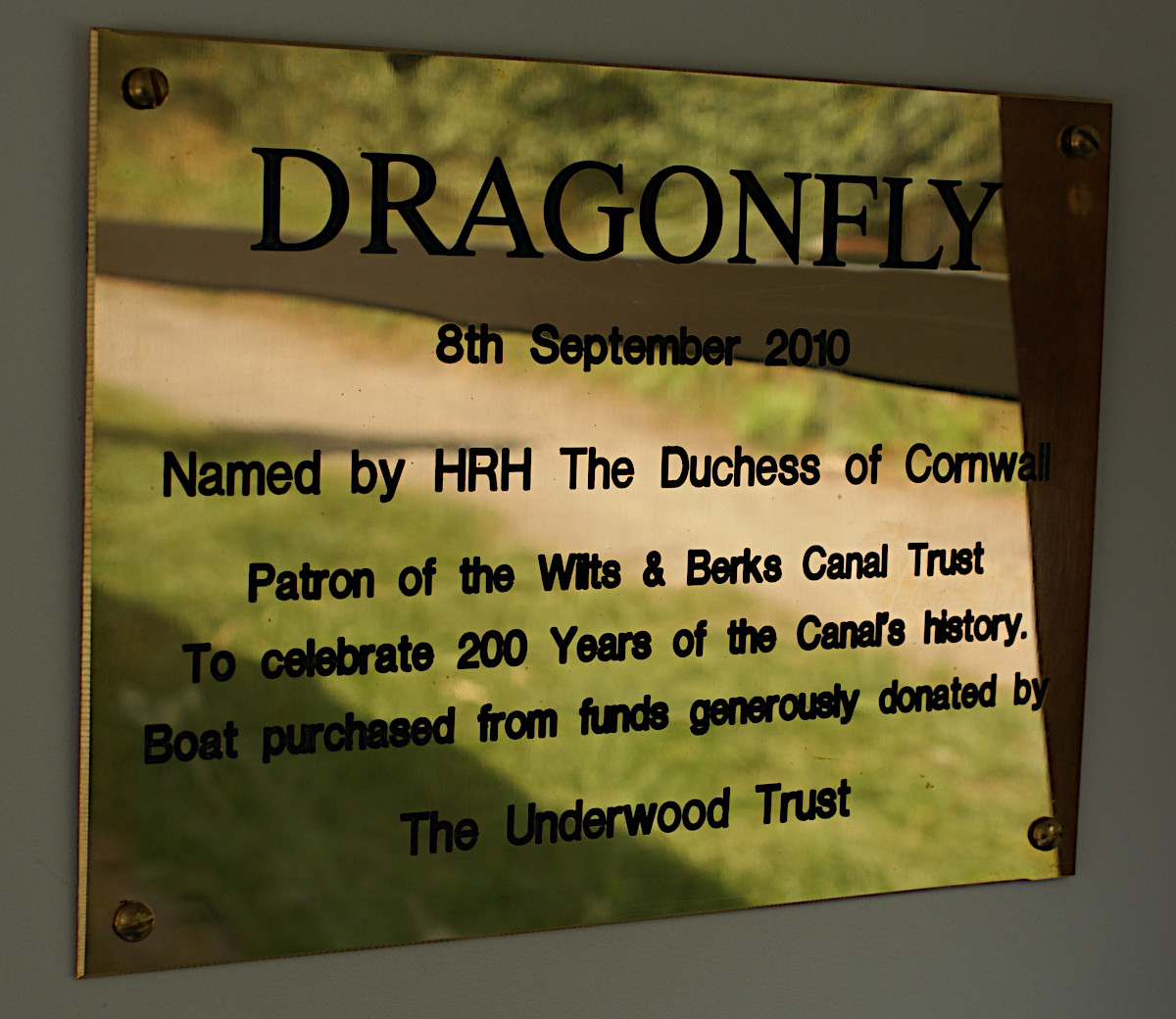 A brief history of Dragonfly

In 2010 the Trust decided to purchase a boat to mark the 200th anniversary of the Wilts & Berks Canal’s opening. Funds for her purchase were raised by an appeal to Trust members and a large donation from the Underwood Trust. She was designed & built for the Trust by Pinders at Worcester and fitted out by Oxford Narrowboats.

Dragonfly is a purpose-built steel narrowboat, 36ft long & weighing 9 tons; the front doors are wider than normal to allow wheelchair access. She also features a disabled lift which was fitted by apprentice engineers from Swindon Mini plant in January 2013.

Dragonfly arrived by lorry on September 7th to the Kennet & Avon Canal at Semington, where the very next day she was named by Camilla, Duchess of Cornwall. No bottles were broken, but in time-honoured fashion, the Duchess carefully poured a bottle of real ale over her bow. This is traditionally how narrowboats were launched, no champagne for these hard workers.

The Duchess then took the helm for a cruise along the canal, later that day the Duchess was pressed into further work when she dug the first sod of the Melksham Link. The Melksham Link will provide a new route for the Wilts & Berks Canal in Melksham using part of the River Avon into the town centre. 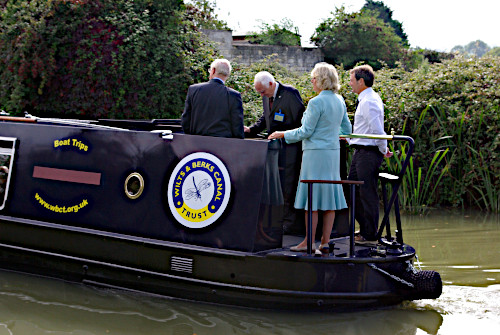 The following day Dragonfly was brought to Swindon and was lowered into the canal from the bridge at Wichelstowe – at that time neither Waitrose nor the Hall & Woodhouse were present, the field there was not much above the level of the canal, the land has since been raised to where the pub now sits.

In 2014 she was craned out again & taken to the first Melksham River Festival to promote the canal and the trust's work.
Later in 2014, the new Waitrose store had been built and opened at Wichelstowe, and shortly afterwards the landing stage there was built by the Swindon Branch of the trust. We were fortunate that Waitrose very kindly funded a third of the cost, Hall & Woodhouse another third, with the Trust to raising the remaining third.

On 13th July 2015, The Duchess of Cornwall once again came aboard Dragonfly as a passenger as she arrived to open this new canal landing stage. The Daily Mail covered this in detail their article can be found here “Camilla is all smiles as she braves mid-summer showers for barge cruise down Swindon canal”
Since then Dragonfly has plied her trade faithfully providing trips from the landing stage at Waitrose, Wichelstowe, Swindon to Kingshill and return to Waitrose, lasting approximately 50 minutes. Providing laughs, smiles, little snippets of history and some great wildlife opportunities to all those who join her on the journey.

The imagination of those involved when we started this journey has been richly rewarded. It’s not just about raising money for the Trust but also providing fun and enjoyment to visitors to Swindon. Dragonfly has carried just over 10,000 adults & children over nine trip seasons, 2,000 of them in 2019, our best year so far.

If you would like to make the journey with Dragonfly why not take a trip.

To donate for the upkeep of Dragonfly and helps us give laughs and smiles to another 10,000 people please visit our donation page.