The East Vale & Abingdon branch chiefly covers the historic line of the canal through the Vale in the area around Wantage, Grove and villages to the west. Officially for internal purposes the boundaries are Baulking Road, Uffington to Jubilee Junction on the Thames.

East Vale & Abingdon Branch meetings are held on the 1st Wednesday of each month from 8pm at Grove Rugby Club, Cane Lane, Grove, OX12 0FL.  Monthly meetings are a chance to discuss current issues and activities and to catch up with upcoming work parties and any outside events.

The East Vale & Abingdon branch includes the middle section of the canal through the Vale of White Horse in South Oxfordshire and covers the section from the Baulking Road , Uffington to the Thames at Abingdon. The branch area also covers the Wantage Branch including the historic Sack House at Wantage Wharf, our small museum. The canal was built from west to east starting at Semington near Melksham in 1795. Construction reached East Challow some 11 years later in 1806. Work continued including the mile long branch into Wantage and the canal was officially opened in September 1810 The East Vale section includes a large part of the “Seven Mile Pound” from Longcot Bottom Lock (within West Vale’s boundaries) through to Grove Top Lock, the Grove lock flight of six Locks and the two Locks. Only the Grove flight is accessible from public footpath.

We normally hold two work parties a month, on the second and fourth Saturdays. For information about work parties and to volunteer please email our work party organiser jon.miles@wbct.org.uk

We have our own branch marquee and displays which we use when we attend local fetes and shows. Eg The White Horse Show at Uffington and Childrey Fete.

We are delighted to have an almost continuous public footpath from Childrey New Road to Neville’s Farm bridge, a distance of around 4 miles (nearly 8% of the main line). The relevant maps are OS Landranger 174 or Explorer Map 170 ( Abingdon, Wantage and Vale of White Horse). A walk leaflet for a circular walk starting and finishing in Wantage is available on this website. Other parts of the towpath are on private land and we would ask that the owners’ privacy is maintained. 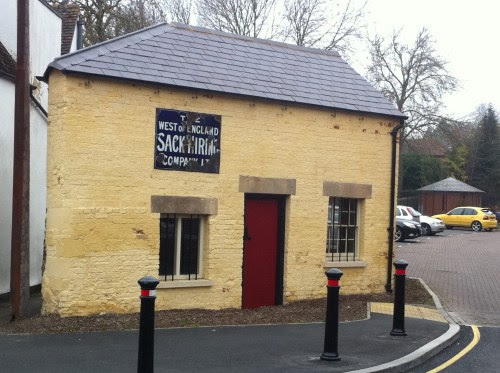 The Sack House at The Wharf

The sack house at Mill Street, Wantage, Oxon OX12 9GF is open from Easter to the end of November on the 1st and 3rd Saturday of each of month from 10am-2pm (currently closed due to COVID-19 restrictions). The small building stood at the entrance to the canal wharf. It was used as a weighbridge, office, coal merchants and dates back to soon after the canal was built into Wantage in around 1810. There are various canal artefacts on display as well as information displays on the industrial archaeology of the wharf area, i.e. not just the canal but also the Flour Mill opposite as well. The name of the museum is taken from the enamel sign on the front of the building advertising the West of England Sack Hiring Company.

Special openings can be arranged for groups. We have already welcomed various cub packs and beaver scout colonies as well as adult groups. The nearest Parking is the Mill Street Undercroft Pay and Display Car Park OX12 9AJ. Bus transport is available from the Market Place in Wantage town centre. For more information please contact the Trust Office on info@wbct.org.uk