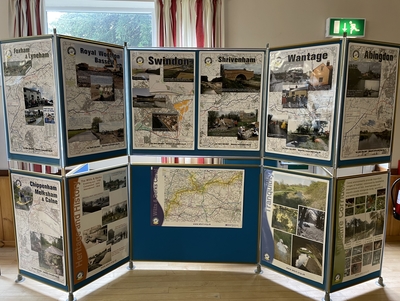 Abingdon and East Vale branch held an Open Day on 6 November, based at East Challow Village Hall, just east of Wantage. The Open Day, which had been much heralded through emails, newsletters, etc., since about July, finally got underway as the nights started to draw in with a vengeance.
Open to the public from 10:30 until about 15:00, when we asked non-members to depart so we could hold the branch AGM, over 40 people signed into the hall’s Track & Trace log book (a very useful tool to ‘capture’ all our visitors’ contact details, of course).
With day-long teas and coffees provided by Val Scatchard and Jean Marsh, an excellent finger buffet provided by Graeme of Valentine’s Catering in Grove as his very generous contribution to the Trust’s fundraising, and a fine selection of Trust posters brought in by Rod Hacker (many thanks to all involved), there was plenty for our visitors to chew over before Big Chief Stovold, acting in true Pied Piper mode, largely emptied the hall for one of his famous guided walks from the hall eastward to the “plane-on-a-stick” at Mably Way, twix Wantage and Grove, and thence (by popular demand stirred up by Ernie Marsh, apparently!) onto the Elms Farm section.
Back ‘home’, the covers came off the buffet, and people continued to chat over lunch until 14:00, when I made a brief introduction to the proceedings in almost my last role as Branch Chairman, and the meeting was opened to the floor.
Whilst the possible Abingdon reservoir and its impact on canal restoration somewhat naturally occupied a fair degree of the discussion, other matters were raised and dealt with too, including the, in places, really dramatic progress around Swindon, off the back of significant housing and commercial development projects there (affording examples of what could have occurred around Wantage and Grove, and might yet in places).
Despite the alternative attractions of the environmental marches associated with COP26, the Open Day was attended by some of the local councillors, with concrete offers of assistance made to help fund e.g. the Elms Farm refurbishment project as soon as the new 20-year lease is signed with the Smith family farming partnership.
We also received an invitation to put on another Open Day in the Spring, specifically targeted at appropriate County, District and Parish Councillors, and planning is already starting for this that augurs well for the long-aimed-for improved communications between the Trust and the authorities in the Vale.
This will almost certainly be hosted by VaST, the Vale Strategy Team, which I am tasked with setting up and leading, providing a single interface between the Trust and important bodies like local authorities, utilities, the Inland Waterways Association and funding organisations, etc., throughout the Vale of White Horse and the rest of Oxfordshire.
The ensuing AGM saw three new officers elected to post; previously the Branch Secretary, Richard Shackleton is the new Chairman, the new Secretary is Val Scatchard, and our new Treasurer is Pete Day, taking over from Vic Stroud after his nigh-on thirty-year ‘reign’ in the position. A big vote of thanks with much applause was provided to Vic for his sterling service.