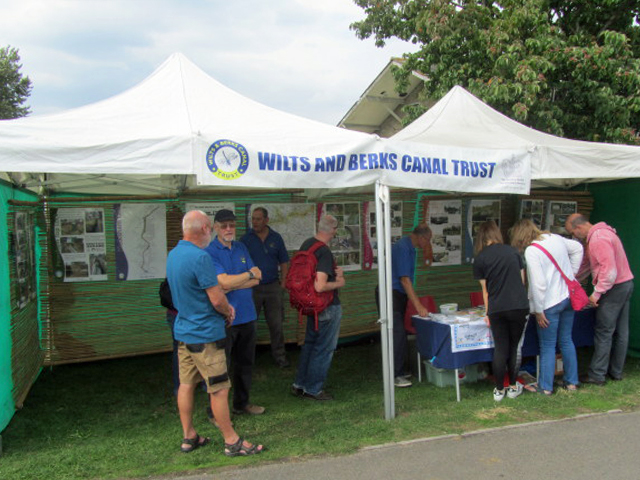 This year’s Melksham Food & River Festival was even bigger and better than in previous years. For this, its fourth year, the entire free community festival was spread out over the whole weekend, and with over 70 stalls attending on both days, it seemed like most of the town had decided to come along and join in the fun.

Saturday’s Raft Race (generously sponsored again by Foxhanger Boatbuilders) was a great spectacle as brave crews battled against the current with determination on a variety of craft. Chippenham Young Farmers were once again triumphant in both the junior and senior categories, although The Rivermead Mermaids really captured the support of the crowd with their bright pink and blue wigs! Their raft was a novel design using drainpipes and school chairs, and following their very successful debut, they have promised to enter again in 2019. Paul Martin (from BBC’s Flog It) was at the Festival again this year, and brought a touch of celebrity to the medal ceremony.
The river was busy both days with canoes, wilderness boats, steam launches and The Mary Archard, but unfortunately, no Damselfly. The engine proved unreliable and so boat trips were reduced to just one boat; a great shame when the weather was so kind, and there were so many potential passengers. Those who did manage a trip were delighted with the experience, and The Mary Archard once again proved what a family friendly boat she is.
Sunday saw the traditional chilli-eating competition, won for the first time by a lady. The huge crowd was entertained by the brave competitors; watching with a pint in hand was definitely preferable to taking part with only a glass of milk to reach for.
There were live music and commentary, cooking demonstrations, a funfair, the WOLT climbing wall, the zipwire over the river, face painting and Phil Newbury with his wonderfully patient horse Frankie offering rides to all. So plenty of activities to keep young and not so young happy in between trying new foods and drinks.
This is the 5th year of involvement for MCC Branch, as the 2014 festival was an all river affair organised by WBCT. This would have been a one-off event, but for the enthusiasm of Melksham’s long-standing Food Festival team to make it a combined community effort from 2015. Since then, MCC Branch has been actively involved in the planning and organisation of the festival, including taking responsibility for the events on the river, and at least 35 WBCT volunteers (including friends from other Branches) were involved in some way over the weekend of Sept 1st – 2nd.
Thank you to all who contributed in any way – it is all a massive amount of work. Many thanks also to those who have been involved all year in helping to organise this brilliant annual event, in particular Paul Lenaerts, Steve Roberts, Ray Dyer and Malcolm Hitchinson. Being a partner has enabled us to raise the profile of the canal in Melksham, be centrally involved in a very important community event, as well as raising funds for the restoration.
It was a wonderful weekend in the park, but next year, we really must have a Trust Raft – a nice little winter project for those who enjoy messing around on the water.