Building a permanent bridge at Noremarsh, 1999

The replacement of a footbridge by a kit of parts in 2019 following vandalism (at Hancock’s Water) wasn’t the first time this had happened in Wootton Bassett. In mid-1999, Allen Porter reported the earlier incident in Dragonfly 74 together with the logistical challenges and the bridge replacement itself.

“Since our last report in Dragonfly, apart from the usual grass cutting, things were quiet until the local yobs once again broke the handrails on our temporary bridge at Noremarsh. After inspection, and consultation with the local footpath warden, it was decided to take the bridge down and to close the footpath until we had taken delivery of a new bridge from the County Council. This we eagerly awaited and, after much 'will it?, won't it?', the main beams, with the handrails already bolted on, were finally delivered to us on the Monday before the August bank holiday weekend.

“In anticipation of the task ahead of us, we had circulated our members, hoping to get at least six-to-eight people for a work party on the Saturday. Much to our surprise and delight, twelve people turned up, plus one gentleman who was walking his dog and joined in for the two hours that it took to get the beams along the north, railway side of the canal and onto the three columns that were in place to receive them. As the beams were 30ft (10 metres) long we anticipated a hard and somewhat dangerous task. They had to be kept upright, as there was not enough room to get them along to the site or to lift them up if we had put them across with the handrails laid down.

“Over the previous weekend, John Bower and I had worked out just how we were going to accomplish the task. Thanks to the co-operation of everyone there, things went according to plan and both beams were placed successfully. Unfortunately, owing to some last-minute adjustments to some other bridges being erected on the Thames Path, the spacers and planking destined for our bridge were used elsewhere, so at the time of writing, we are awaiting the replacement parts which will enable us to complete the bridge. Special thanks must go to Peter Smith for the use of his car to tow the said parts to the site.”

In Dragonfly 75, Allen was able to report that a fortnight after the work-party’s Bank-Holiday efforts, it was given the missing parts and was able to finish the bridge in one day. Unfortunately, no-one thought to take a camera, so he couldn’t provide photos. Instead, he provided a description and line drawings of the method used to get the beams to the work-site:

“As reported in 'Around the Branches' in the last issue, we did get our two main beams for the bridge at Wootton Bassett. Our main problem was how to get them from the slipway end of the canal, along to the bridge site. The obvious way was to put the beams in the water and float them along; (easy with a rope at either end). We did it before a few years ago with the bridge further down the cut. The big snag was that, the beams being longer, heavier and with handrails attached, we would have needed a crane to get them out. Luckily, Mr Lovelock, the local footpath warden, loaned us the two dollies they use to get bridge sections to sites when installing new or replacement bridges. As mentioned in the last Wootton Bassett report, we had worked out a plan, and the tools we would need to do the job (see accompanying drawings), and were successful.

“After having towed the beams to the site, we then placed one of the machine skates onto the two northside pillars as in (D) then slowly pushed the beams over the gap towards the towpath side. After a few minutes, the first beam started to slide off the skate, so another skate was tied alongside the first one on the second pillar, and all went well until it was over the towpath. Here we had prepared a platform of old bricks and planks upon which was an Acro prop (F) on top of the fourth skate (E). 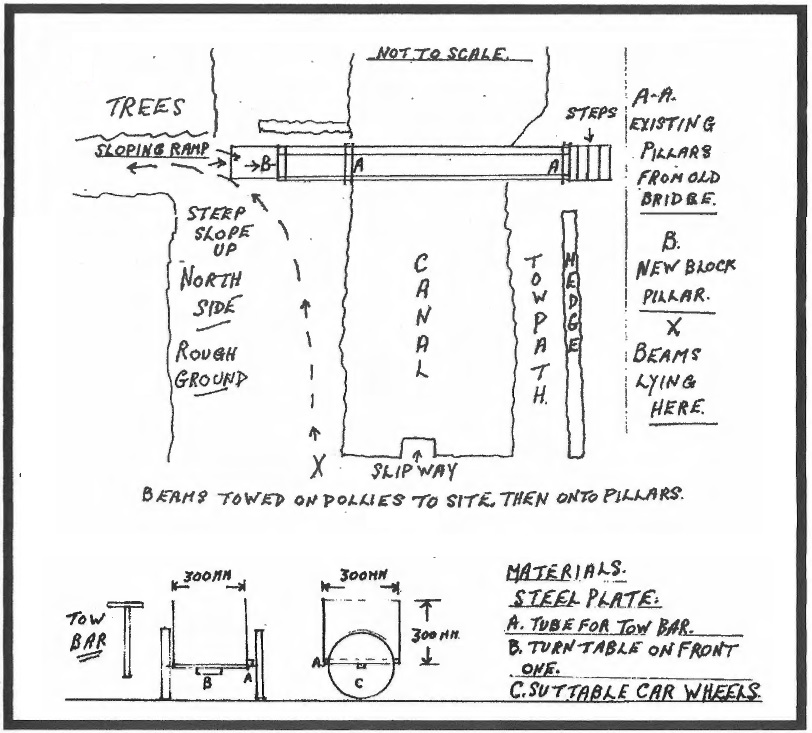 “After we had adjusted the prop to the correct height, the beam was gently lowered onto the prop and, with two volunteers holding and pushing the prop the beam was pushed the last two feet into place on the towpath pillar. Having learnt the snags with the first beam the other went over in half the time, the whole job taking just two hours.

“All the necessary safety precautions were taken and it was emphasised to everyone that, should the beam look like falling in any phase of the operation, they were to jump clear and not to try to prevent the beam from falling. We could have picked the beams up. Not so easy to attend an accident victim, besides all the subsequent enquiry and paperwork.”